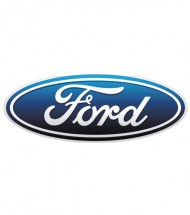 The Ford Series Multi-Media Navigation System from CARSHOW ELECTRONICS is very much like the factory navigation system in many ways.

Not only does it look like it was installed at the factory but the electronics design allows the CARSHOW Ford Series to fully integrate with the on-board Ford factory systems such as Ford Sync and 6-disc changer (Does not support Non-Sync or Sony equipped vehicles), Bluetooth, USB port and more.

The Ford Series systems include a rear-view camera that mounts on to the factory tailgate latch.

Other Ford Series features include a virtual 6-disc changer which allows you to store CD’s and music to on-board memory, DVD playback of movies while in park, iPod™ interface for music playback, USB port for flashdrives, SD media port, intuitive user interface which makes the system easy to use from the start and much more.

The Ford Series system by CARSHOW fits 2010+ Ford  F150 vehicles and will provide years of enjoyable driving and entertainment.

Your shopping cart is empty!

Continue
Welcome to Trail Duty. Feel free to contact us if you have any questions about our products or an existing order.